In the previous post we were dealing with an idealized setup. Each 5 by 5 digit fills completely a 5 by 5 image. In real world this is a very unusual occurrence. When processing images there is no guarantee that subjects completely fill them. The subject may be rotated, parts of it might be cut off, shadows may obscure it. The same applies to processing sounds. Ambient noises may be present, the sound we are interested in may not start right at the beginning of the recording, and so on. In this post we are going to show how adding a small degree of uncertainty can defeat an approach based on linear regression. We show how deep neural network can deal with this more complex task, at the expense of a much larger model and longer training time.

In order to simulate a real world setup we are going to slightly alter image generation. Previous image size and shape size were both set to 5. This way each shaped filled perfectly the entire image. There was no uncertainty as to where the image is located. Here we increase the image size to be twice the size of the shape. This leads to shape “jitter”, where the shape can be located anywhere in 10 by 10 grid, as shown in Fig 1. 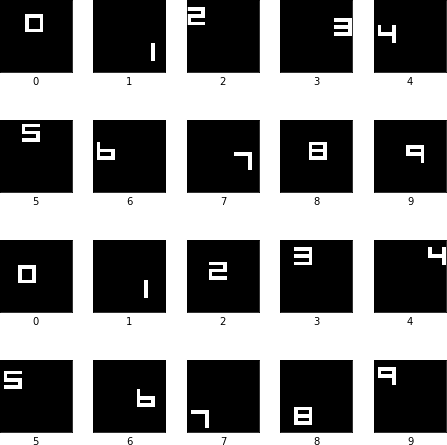 We start by simply modifying img_size variable and running the same linear regression. Somewhat surprisingly, after 5 steps we hit 73% accuracy. When we complete the remaining steps, we reach 100% accuracy. It seems that this approach worked. However, this is not the case. Our linear regression learned perfectly the 100 examples we had. The mistake of the simple approach is not using any test data. Typically, when training a model, it is recommended that about 80% of data is used as training data, and 20% are used as test data. Fortunately, we  can easily rectify this. We generate another 50 examples, and evaluate accuracy for those. The result is 8%, or slightly worse than by a random chance. To see why this is the case, let us look at matrix W. Again, we reshape it as a 10 by 10 square, and normalize it within -1 to 1 value. The result is shown in Fig 2. 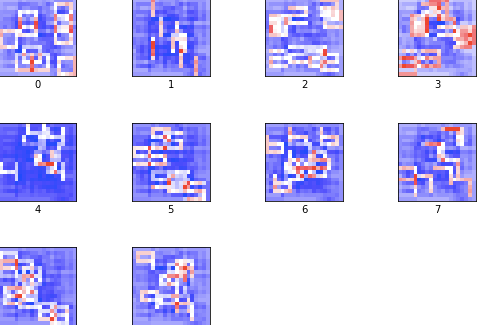 Now it is obvious that rather than learning how to recognize a given number, linear regression learned the location of each digit. If there is, say, 4 leaning against the left side of the image, it is recognized. However, once it is moved to the location not previously seen, the model lacks the means to recognize it. This is even more obvious if we run the training step with more examples. Rather than maintaining the accuracy, the quality of the solution quickly deteriorates. For example, if we supply 500 rather than 100 examples, the accuracy drops to 54%. Increasing the number of examples to 5,000 drops the accuracy to a dismal 32%. The confusion matrix shows that the only digit that the model learned to recognize is 1. 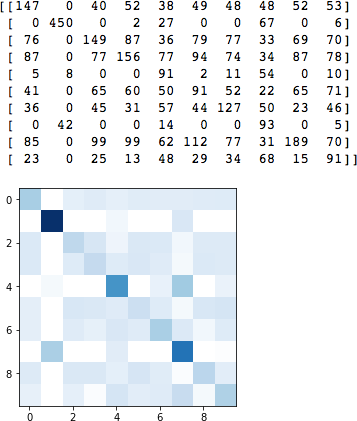 Linear model is sufficient only for the most basic case. Even for a highly regular items, such as LCD digits, the model is not capable of learning to recognize them as soon as we permit a small “jitter” in the location of each digit. The above example also shows how important it is to have training and test data sets. Linear regression gave an impression of correctly learning each digits. Only by testing the model against independent test data we discovered that it learned positions of all 100 digits, not how to recognize them. This is reminiscent of case of a neural network that was trained to recognize between tanks camouflaged among trees and just trees (see Section 7.2. An Example of Technical Failure). It seemed to performed perfectly, until it was realized that photos of camouflaged tanks were taken on cloudy days, while all empty forest photos were taken on sunny days. The network learned how to recognize sunny from cloudy days, and knew nothing about tanks.

In the next installment we are going to increase the accuracy by creating a deep neural network.

You can download the Jupyter notebook from which code snippets and images were presented above from github linreg-large repository.